Recent Advances in Deep Sea LEDs for the Offshore Industry 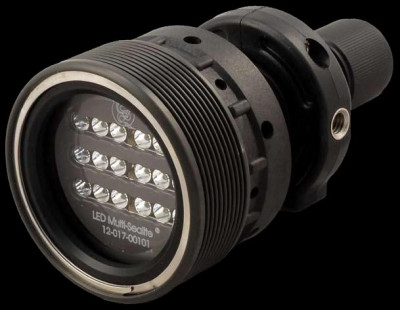 DeepSea Power & Light® (DSPL) has been involved in advanced underwater lighting since the company’s founding 25 years ago, including applications of LED lighting in harsh environments for over 10 years.

Light Emitting Diodes (LEDs) are increasingly found in undersea lighting, because of their brightness, color quality, power efficiency and rugged durability. Previous papers and articles by the authors have discussed differences and advantages over gas discharge lamps [1], [2], [3], while additional articles in popular offshore trade magazines have quantified their application with respect to reflectors, alternative light sources, and optimal positioning for minimal backscatter [4], [5], [6].   In addition to the rapid improvement in LED technology, electronic drivers have become more compact and increasingly efficient, providing options for thermal roll-back, dimming, and wide range AC/DC with constant current output.  DSPL engineers have built both pressure-protected and pressure-equalized LEDs and driver electronics, with some oil filled LED arrays and drivers successfully operating at full power to 20,000psi.

As the name “Light Emitting Diode” suggests, an LED is an electronic component consisting of several layers of semiconductor material.  Electrical power is driven through the diode, where bound electrons capture, then release, electrical energy as a very narrow spectrum of colored light.  Different colors of light are produced by a process called “doping”, where specific impurities are intentionally introduced into an extremely pure semiconductor element, usually silicon or germanium, changing both its physical and electrical properties.

Surprisingly, most white LEDs are really blue LEDs, coated with a single phosphor compound that absorbs the narrow spectrum blue light, and reradiating it as broad spectrum white light.  It’s impressive to think how remarkably effective this process is when looking at a high brightness white LED.

LEDs have important strengths compared to traditional filament or gas discharge lighting including: 1) rapid on-off switching; 2) increased efficiency; 3) maintaining constant color with dimming; 4) resistance to vibration and shock; 5) very long operational life; 6) specific choice of light color, with no light lost to filters; and 7) ability to run the lamp in air without risking damage to the light source and reflectors from excess heat.

An LED is one part in an electronic circuit.  The other parts are the power source, and the current controller called the “driver.”

LEDs are characterized by:

Brightness:  Caution: Manufacturers are now placing a “Vision Advisory Claim” safety warning in their specification sheets.  One manufacturer warns, “Users should be cautioned not to stare at the light of this LED product. The bright light can damage the eye.” [7]

Lumens versus watts:  LEDs produce five times the amount of white light than an incandescent lamp of equal power in watts.  It’s therefore more practical to talk about light-out (lumens) than power-in (watts).  A “lumen” is a measure of light as perceived by the human eye.

Heat:  LEDs still produce heat, which must be drawn away from the LED.  Fortunately, the cool ocean is a great heatsink.

Most LED manufacturers report maximum efficacy under ideal circumstances, optimized by a short electrical pulse and an instantaneous light measurement.

Lifetime:  LED life, or “lumen maintenance,” is the time it takes for an LED to reach 70% of its initial light output [9].

Manufacturers publish estimated life ratings for individual LEDs of up to 50,000 hours or even more, but these are best case scenarios under controlled laboratory conditions. A more realistic simulation is a dense LED array running in air on a hot deck at mid-day.  DSPL provides a thermal rollback circuit to reduce current and dim the LEDs, lowering heat without shutting off the light completely.  A thermal cut-out switch provides a secondary safety feature.

Reflectors:  LEDs project their light predominantly outward perpendicular to the face of the die, in a “Cosine” distribution. This means there is less light projected as the angle falls off to parallel with the face of the die. Compact reflectors and microlenses are all that’s needed to capture and redirect the projected light as either a spot light for maximum distance, or a floodlight for wide area illumination.

The principle advances in LED technology in the past year have occurred in the area of A) increase in light output for power input (lumens/watt), B) multi-chip packages, C) minimal package size, and D) drivers.

Commercially available efficacies have risen in the past year from 80-lm/watt @ 350mA for the best cool white LEDs, to 110-lm/watt @ 350mA.  In November 2008, one manufacturer announced it achieved a sustained 173-lm/watt in the lab, promising continued advancement.  The extra good news is that as more light goes out the front, less heat goes out the back.

High Brightness LEDs are typically rated for light output at 350mA.  They can be run at higher currents, but not to exceed manufacturer stated “Maximum Operating Current.”  With the higher power, light output does increase, but at a reduced lumens/watt.  The difference is more heat out the back. 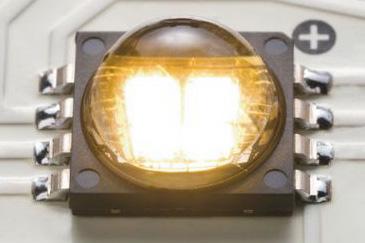 Figure 2. The Cree MCE 4-chip LED allows for more light from a single package while each die operates at a cooler temperature. [10]

To maximize light output with least heat, a few LED manufacturers now package multiple LED dies under a single silicone dome.  This allows a higher density of LEDs, each operating at their nominal power rating.

Commercially available products include Osram OStar (6 dies), Cree MCE (4 dies), Seoul Semiconductor P7 (4 dies), and Seoul Acriche. The Cree MCE yields a brilliant 430-lm at 4 watts (Fig. 2). The Seoul P7 produces 360-lm at 4 watts. The Acriche uses two parallel, but reverse, strings of 36 tiny LEDs (72 total per part), that use their unidirectional current flow property to rectify the two AC half waves directly.  The only other required parts are a current limiting resistor, and a thermal cut-out switch.  While this circuit is the ultimate in simplicity, it does not lend itself to a wide range of dimming options, is very sensitive to overvoltage transients, and can produce flicker problems with some video systems. The best Acriche produces an underwhelming 46-lm per watt, meaning more wasted heat.

At least two manufacturers are making minimal packages holding High Brightness LEDs.  They start with the die mounted on a slightly larger ceramic substrate, then add only the smallest amount of anything else.  The Cree XP (Fig. 3) and Philips Luxeon Rebel (Fig. 4) are examples of this approach. 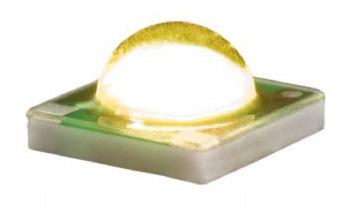 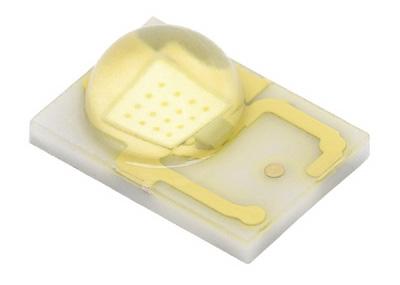 In addition to DSPL’s temperature monitoring circuitry that prevents overheating, LEDs eliminate the start-up/cool-down requirements of HID and Xenon ballasts. The DSPL LED Multi-SeaLite is as easy to use as a flashlight.

The fluid compensation problem has been a random, mysterious, and complex problem.  Most DSPL pressure compensated LED lights have shown no trouble.  But a few had a small fraction of their LEDs brown.  DSPL engineers initially suspected the phosphor layer was being contaminated, but a collaborating major LED manufacturer later discovered browning of some of its blue LEDs, which contain no phosphor.  Investigation by DSPL and the LED manufacturer has produced a growing sense that it is not the compensating fluid itself that is the problem, but its ability to act as a carrier to move contaminants in the system into the area just above the die.  There, the combination of heat and light causes the silicone to brown.  No-clean soldering flux residue is one potential contaminant source.  Potting the LEDs in certain silicone rubbers has shown promise in preventing the chemical migration.  Eliminating the problem entirely remains the goal of intense research. 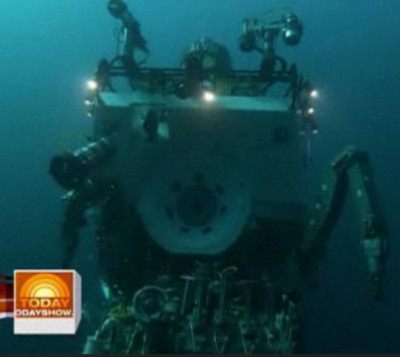 Figure 5. Woods Hole Oceanographic Institution’s DSV ALVIN carries Ann Curry, Co-Anchor of MSNBC’s Today Show, on an underwater expedition with eight DSPL LED SeaLites, three on the port side, three on the starboard side, one forward, and one in the belly. See the full video at [13].

DSV ALVIN, Woods Hole Oceanographic Institution’s famed manned submersible, has operated with up to eight DSPL 2000-lumen LED SeaLites®. The efficiency of the LED lights allow WHOI pilots to operate three LED lights on the same circuit a single incandescent light ran on before. In March 2008 on the 9-North hydrothermal vents, pilots reported navigating 6km on the seafloor with all lights running continuously, an operational first. 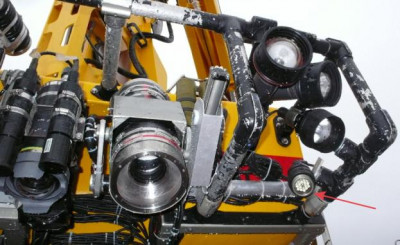 Reuban reported the “Lights are great, and should be perfect for instrument deployments with that efficiency. The HD video with the 400w’s, the 150w’s & the LED’s is pretty stunning.”

We were very impressed with the beam control on the spot unit, like a large laser pointer!  I have these lights spec’d for an 8 camera 3D imaging array we’re building for the University of Alberta this winter.” 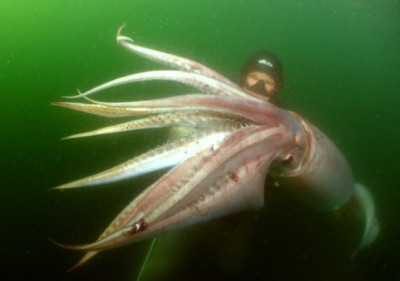 Scott called the white DSPL LED-SeaLites®, “incredibly awesome.” “That light is the finest light I have ever used,” said Scott.  “It is durable, broad beamed and clear white color. It worked perfectly for use with the night vision system (I would spot the squid with the light, then turn it off for the NV to capture images).  It is perfect for HD video.”

DSPL continues refinement of current product, and development of the next generation of deep ocean, light weight LED lights, including large area panel lights. Novel methods of pressure compensation and heat extraction will create some of the most unique lights ever made by man for use in the sea.

We appreciate and thank Reuben Mills, ROPOS for his field test of beta versions of the LED-SeaLites®. Such feedback helps validate and steer design.

The authors recognize Scott Cassell for his early efforts to characterize and understand the impact of the predation behavior of the voracious and spreading Humboldt Squid population, and share that knowledge with a general audience who may one day be affected.

Update: Please note that some links may be out of date

[9] ASSIST, the Alliance for Solid State-State Illuminations and Technologies