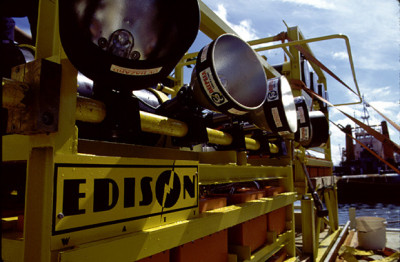 In 1996 the R.M.S. Titanic, Inc., a New York-based, publicly traded company, sponsored an expedition to raise part of the Titanic’s structure. DeepSea re-designed its 1200 watt HMI light for this venture. In addition, four autonomous light towers, named Edison towers after Thomas Edison, were designed for this project, with each light tower holding five 1200 watt lights. DeepSea’s full-ocean-depth SeaBatteries were used to power the lights, with thirty SeaBatteries on each tower. The lights illuminated the Titanic for a live video feed to two cruise ships circling above that were part of the expedition.