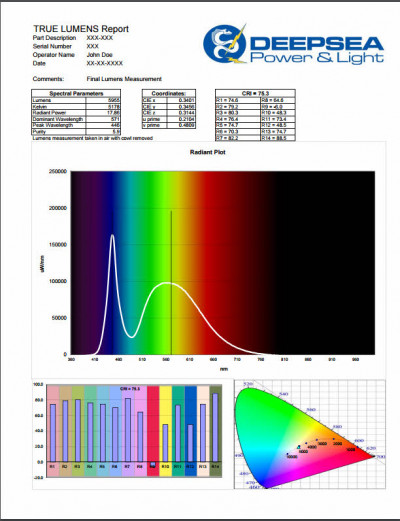 In the heyday of the halogen light, it was common for underwater light manufacturers to simply repeat the light output data published by the manufacturers of the halogen lamps themselves when specifying the light output of their own light assembly. This practice didn’t take into account several factors including reflector performance or light absorption by a pressure window. Now the same practice is often seen being extended to LED lights whereby some manufacturers are simply taking the specs for a single LED as provided by the LED manufacturer and multiplying it by the number of LEDs included in the light assembly. This ignores the same reflector and window considerations plus factors unique to the performance of the LED drivers and typically overstates the actual output of the light.

Since 2006, we have been using an integrating sphere manufactured by SphereOptics and calibrated to standards traceable to the National Institute of Standards and Technology to accurately measure the output of our production light units as well as providing this service to other light manufacturers.

Early in the development cycle of LED lights, it became clear that many of the specs published by competitive manufacturers of underwater LED lights were overstated compared to what was actually being achieved by those products. DeepSea purchased some of the leading competitive lights and measured their output using the integrating sphere. The competitors’ light output claims were 70%-90% above actual measurements and none came close to the actual light output of DeepSea’s comparable LED lights. DeepSea then sent competitive lights as well as its own lights to an independent optical lab. The results were the same – the competitors’ light outputs were grossly over-stated in their specs and none came close to the actual output of DeepSea’s comparable LED lights.

To ensure that our clients have accurate data of what to expect from the output of our SeaLites, we supply our proprietary True Lumens Report as measured by our in-house integrating sphere with every SeaLite Sphere, Lumos, and Nano light. In addition to the lumen output, the True Lumens Report also provides data about other spectral parameters including dominant and peak wavelength, CIE chromaticity, and Color Rendering Index.