LEDs are Now the Choice for Underwater Lights 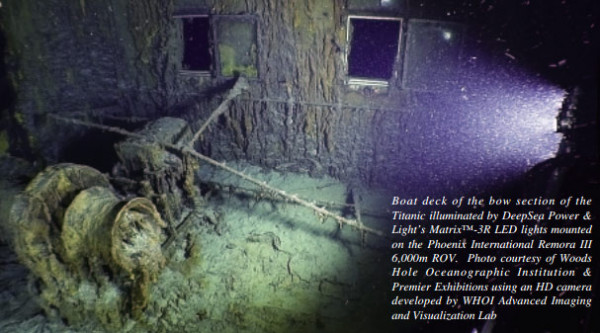 In the picture above, the boat deck of the bow section of the Titanic looks almost like it is illuminated the same as one would illuminate a room in their house. Flip a switch and the light goes on. It’s that simple, right? Well, in the end, it really is just a matter of applying power to the light, but there was a long development path for those LED lights before they ever got near the Titanic. 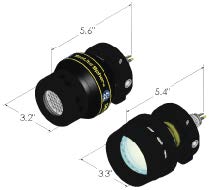 The SeaLite® Sphere represents current underwater LED lighting tech- nology in a 6,000m housing that is about the same size as the Deep Multi-SeaLite halogen light which it replaces in a ‘plug & play’ manner

The history of the Light Emitting Diode, or LED, started in 1907. It took decades before LEDs found their initial practical application as indicator lamps in the 1960s. And it took several more decades of ongoing improvements before they became popular for a much wider range of lighting applications. LEDs began being used for underwater lighting in the 2000s and they are now taking over as the industry standard. This is not surprising when one considers that today’s standard LED lights can provide about 3.4 lumens of light per dollar versus about 2.3 lumens per dollar for a halogen light, both in housings rated for 6,000m depth – nearly a 50% advantage for LED lights over the previous standard underwater lighting technology.

Compared to other forms of lighting technology, LEDs are inherently rugged and efficient with a long expected lifetime – all key factors for underwater use. But to be successful underwater, lights also have to be easy to operate and perform reliably. This requires driver electronics, sometimes called ballasts, to condition incoming power and enable dimming. To maximize light output, as many LEDs as possible are typically squeezed within the pressure housing. Today’s underwater LED lights should be able to provide 5,000 to 6,000 lumens of light with input power consumption of 160 watts or less. This is approximately four times more efficient than the previous halogen lighting technology, leaving more power available for other uses such as thrusters, manipulators, and instrumentation, which is of particular importance for AUVs operating on batteries.

Properly designed underwater LED lights can be “plug & play” replacements for halogen lights. They can operate using the same wide choice of connectors, the same input power (120VAC or low voltage DC), and the same dimming controls (variable voltage or phase control dimming) as the halogen lights that they replace. This makes it easy for underwater operators to significantly upgrade the lighting that they use without encountering complex or costly changes in the process.

For many years, the light output of underwater halogen lights has been estimated simply by using the bulb manufacturer’s specification. The output of LED lights were initially estimated in a similar manner by multiplying the LED manufacturer’s output specification for each LED times the number of LEDs used in each light. Such calculations ignore several factors, including reflector design, window transmittance, and driver efficiency. Tests recently conducted on a number of popular LED lights indicated that the output specifications published for those LED lights were overstated by 40% and more. LED lights are now available with a report of measurements made using a calibrated integrating sphere that accurately determines the true total lumen output. These reports ensure users that the light outputs meet or exceed the manufacturer’s stated lumen specification before they are sent offshore and installed on a vehicle. These reports also include dominant and peak wavelength, CIE chromaticity, and color rendering index, all of which can be useful information above and beyond just knowing how much light out- put one is actually obtaining from the light.

A useful accessory for successful LED lighting technology is a report that documents true lumen out- put as well as dominant and peak wavelength, CIE chromaticity, and color rendering index

Underwater LED lights with 5,000 to 6,000 lumen output also compare favorably against incandescent lights in terms of light output per pound of weight, another important characteristic to be evaluated when selecting optimum lighting for underwater activities. A 6,000 lumen LED light provides about 22.5 lumens per gram while previous halogen lights offer about 13.2 lumens per gram, again comparing both in housings rated for 6,000m depths. One could have more LED light for the same weight as previous halogen lights or equal light with less weight on the vehicle. This can translate into power or thrust savings or both, perhaps not in significant quantities for work vehicles but for smaller vehicles on missions with longer deployment times, especially for AUVs operating on self-contained battery power.

One unique aspect of LED lighting that requires caution on the part of the user is browning of the LEDs. Browning is a phenomena in which a coating develops inside of the LED envelope itself, resulting in decreased light output to the point where a browned LED light is actually less efficient than a halogen light. Browning can be caused by overheating and by chemical contamination within the lighting fixture. Some lights can lose 50% or more of their output after less than eight hours of use if care is not exercised in the design. LED lights should be rigorously and relentlessly tested prior to release of the product and then light output measured during and after production in order to catch the browning phenomena. Although thorough design testing can typically eliminate browning due to overheating, it is more difficult to detect potential contamination that can cause browning that has an equally devastating effect on light output. The contaminants might come from varying production processes and the browning may occur relatively slowly, taking many hours to become visible to the naked eye. Once installed next to a camera, the effects of the browning will be masked until the camera’s automatic compensation circuits can no longer compensate for the decreasing light, at which time it will finally be obvious to the user that the lights are not functioning as expected and need to be replaced. This unwelcome surprise can be avoided if the output is measured in an integrating sphere during and after assembly to ensure that light output has not unknowingly decreased due to browning of the LEDs, even if undetectable to the human eye in the early stages.

Most underwater LED lights include a mechanism to sense when the internal temperature gets high enough to compromise the safe operation of the electronic components. Some lights simply shut the light off until the temperature falls within acceptable limits. More advanced underwater LED lights incorporate a graceful fold back arrangement in which the light output is decreased but not turned off. As the light output is decreased, the internal temperature of the light also decreases, automatically returning full power when the temperature is again at a safe level. This enables an ROV to avoid blackout situations and also enables the light to be run safely in air for long time periods during on deck tests.

While most LED lights are designed to replace the 250- watt halogen light that was the standard light used on most ROVs used in offshore oil applications, LED lights have also been replacing higher power HID lights used on ROVs for research and filming missions. These LED lights can produce greater than 18,000 lumens or 50% more light than a 400 watt HMI light. Such lights could also be useful as “headlights” positioned on the brow of most offshore oil work class ROVs. 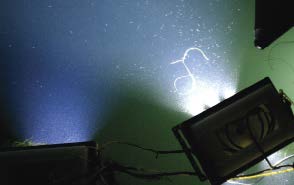 Two sets of similar LED lights under test in a bay. After 1 month operation, the set on the left shows definite signs of “browning” which significantly decreased light output and also shifted the color from white to blue.

The most advanced configuration of LED lights is to position tiny remote LED light heads where needed around the ROV while individual drivers for each remote light head are housed together in one or more central housings. This takes advantage of the small size of the LED light heads without their accompanying driver electronics. This system design can help with balancing and weight distribution of a vehicle by locating the relatively larger and heavier ballast close to the center of gravity and positioning the tiny and lighter remote light heads wherever the lights are needed to optimize the lighting tasks at hand. This configuration can also save on overall cable weight.

As a testament to the ability of underwater LED lights to withstand high vibration and normal in-air usage, it is interesting to note that DeepSea Power & Light also designs and manufactures LED lights that are used as underwater thru- hull lights on recreational boats. 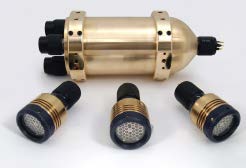 An advanced remote head system configuration with three remote LED light heads and a single ballast housing containing the drivers for all remote heads. Housing material in this case is beryllium copper for use in a special long-term immersion application

The goal of this application is primarily one of aesthetics with some fishing boats taking advantage of the ability of the lights to attract fish. The lights are most often mounted on the transom where they experience a high vibration environment. While they are underwater when the boat is at rest, the lights are often kept on when the boat is running, which means they are operating out of the water. And of course, the lights are typically constantly in the water for several months at a time, even when not powered on. The basic ruggedness of LED lights proves their value in these applications as does the automatic thermal control circuitry. 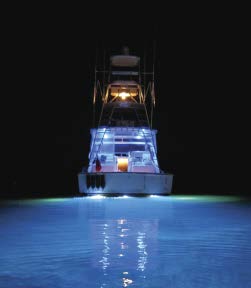 Because of their excellent vibration resistance and long life, under- water LED lights are also used for thru-hull applications on recreational boats. This 36-ft. Cabo sportfishing boat has three white, three blue, and three green 12-LED On-Hull SeaLites® mounted below the water line in its transom as well as one white 18-LED Thru-Hull SeaLite mounted on each side.

As a world-leading supplier of underwater lights and cameras, DeepSea consistently strives to optimize its underwater LED lighting designs. LED technology has been improving at a rapid rate, and DeepSea has kept pace by designing and manufacturing six “generations” of underwater LED light designs over the past 6 years, culminating in today’s SeaLite Sphere underwater LED light which typically provides 6,000 lumens of light with graceful thermal rollback and a patented mechanical construction that provides maximum LED density in a high-pressure housing, along with test and measurement documentation that guarantees the lights perform as expected when subsequently installed in the field. Further improvements will no doubt take place, but today’s LED lighting has already laid claim as the preferred technology for underwater lighting of all types.